Atlas Copco, leading manufacturer of compressors and generators, with a branch office in Wilrijk, searched for and found a way of having mobile compressors operate at an ambient temperature of -50 °C. This was achieved through testing in the climate chamber of the OWI-Lab (Offshore Wind Infrastructure Application Lab). 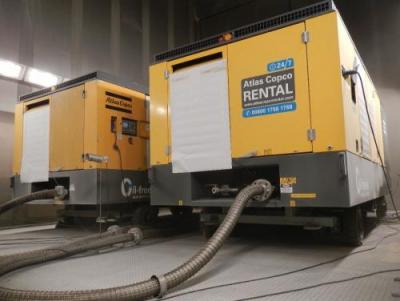 A Siberian company with a production site in the coldest region of Russia needed up to 43,000 m3/h of 100% oil-free air to be used for the preventive maintenance of its turbocompressors and approached Atlas Copco to achieve this. Since it involved an outdoor set-up in an environment where temperatures can regularly drop to -40 °C, a tailor-made solution was required that would be especially designed for and validated at extremely low temperatures.

Atlas Copco’s engineers met the challenge head-on. After all, technical modifications to the equipment were required for these temperatures. The modifications ranged from the use of alternative liquids, new doors and additional removable covers to a software update and tailor-made accessories and set-up.

All these changes had to be validated. For this Atlas Copco used OWI-Lab's climate chamber in the Port of Antwerp. The temperature in testing chamber was brought down to -50 °C until stable temperatures were reached. A cold-start test was performed for which two compressors were set up next to each other. The first compressor was used for validation with regard to low temperatures and the second one was tested for product development. The test was considered a success when the standard supply of compressed air was achieved. 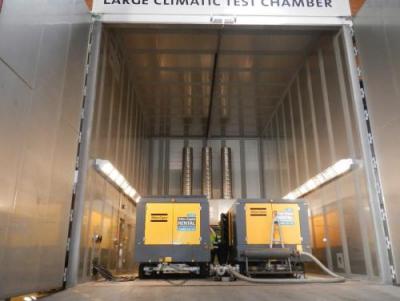 The compressor operated for 26 hours at full power after the cold-start procedure. No damage or defects were observed during the test procedure. The Atlas Copco service engineers were also ready for any unexpected circumstances. An adjusted service level was applicable: six engineers were trained to install and monitor everything on-site during the full 20 days of the project. The project took place in November 2017: after the successful test, the complete project was a success, from installation to disassembly.