In 2016, XANT – a Belgian company producing mid-sized wind turbines – performed low temperature tests on its XANT M-21, 100kW machine, to ensure safe and reliable operations in areas where temperature can drop as low as -40 °C. The XANT M-21 wind turbine, targeted to fulfil the energy needs of small enterprises and communities in remote locations without grid connection, has been adapted to work in so called ‘cold climate’ locations, a growing market within the wind power business, as stated in a recent study by IEA (find more infomation about this market here). 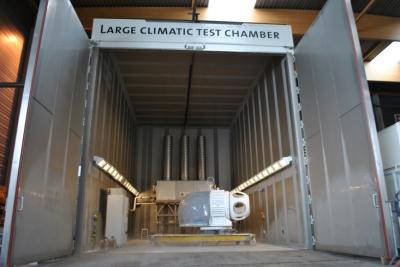 Low temperatures and icing conditions during winter time bring additional challenges to the wind turbine design in general, and the process of setting up wind parks in such harsh locations. Maintenance actions for example can be expensive, or they need to be postponed due to access restrictions, in the worst case scenario when dealing with remote locations such as in Alaska.

Developers need to take additional environmental loads into account ,such as ice accretion on rotor blades and sensors. Also different materials and lubricants need to be used, and cold start-up procedures have to be adapted, in order not to damage pitch and yaw drives for example. Also other equipment in the nacelle, such as power electronics and pumps, need to be checked and their operations validated for such extreme events in cold climate sites. In order to cope with these challenges, the engineering team at XANT developed certain tailored cold climate changes. In order to test and validate the cold climate design changes, a low temperature test campaign was set up in collaboration with OWI-Lab. Due to the large size of the climate chamber, the full nacelle of the wind turbine and its power electronics unit (which are normally installed in a separate unit below the wind turbine) could be installed and functionally tested in extreme low temperatures down to -40 °C. Different start-up and braking procedures have been successfully validated, as well as yaw operations during cold start. Also the power electronics and sensors could withstand the test campaign. XANT is a spin-off of the company 3E, one of the founding members of OWI-Lab in 2010.